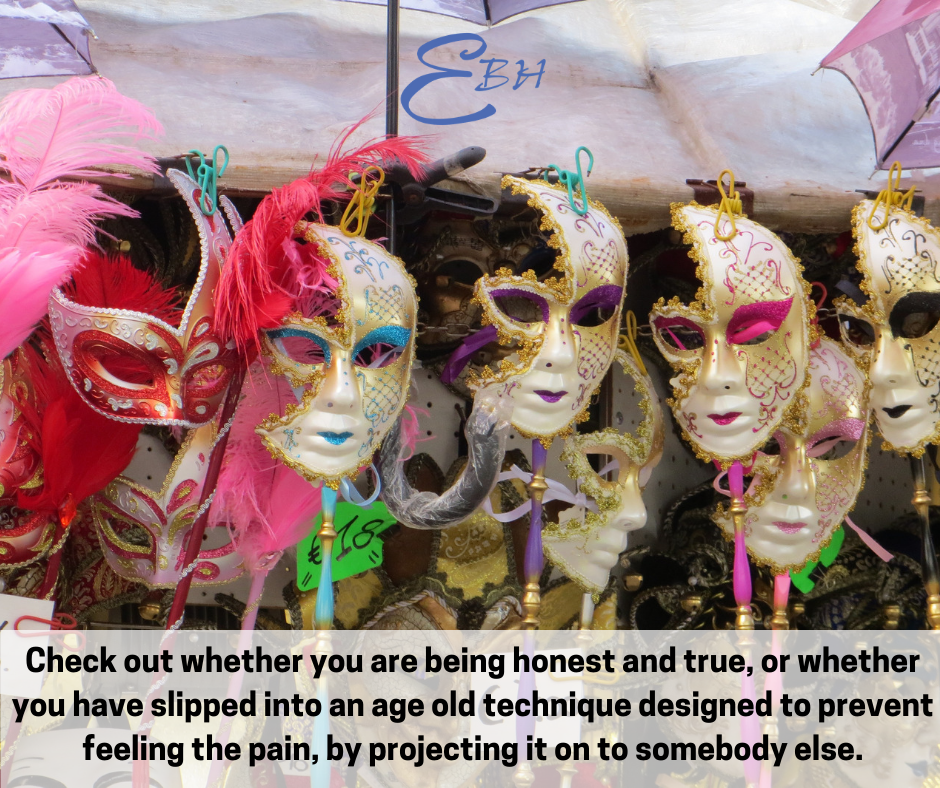 Many years ago, when working for a superb organisation by the name of Mercantile & General Reinsurance, the Financial Director and I enjoyed an on-going bit of banter about whether or not one or other of us was speaking honestly from the heart, or merely projecting what was felt, without owning up to the cause.

Whilst our light-hearted exchanges went on for many years, the origination of this private joke was a moment in which I, as a very junior employee, had told him to stop projecting his cynical feelings about the pioneering work in which I was engaged, on to others, but to rather own up to his feelings of concern instead.

Although I find myself somewhat appalled when recalling the audacity of speaking to a director that way at such a young age, I am also warmly encouraged by the memory of the open-minded and willing manner in which he engaged in the discussion about what projection actually is.  For in truth, he had never heard of this defense mechanism and became most intrigued by it as a result.

Having been the culprit, recipient and observer of projection many times over the years – as we all are – I have started to see the inherent need to defend in a different light.  Consequently, I am more empathic towards those who engage in defensive behaviour, for all projection really is, is a fear of facing up to one’s own feelings – usually negative, but not always.

The ‘risk’ of consciously engaging with feelings, is that we might find ourselves discovering the discomfort of anger, disappointment, confusion, or some other less palatable state of mind.  And so we avoid, or project on to others instead.

It is far easier to be angry, upset or disturbed by the actions of somebody else when something goes wrong, than to admit that perhaps we were part of the reason for, or cause of the disappointment.  There may be a little envy thrown into the mix too.

For example:  consider an instance in which a life experience shared with another does not pan out the way we had hoped. It may feel more comfortable to default to ‘blaming’ or ‘accusing’ the other of not being willing enough to embrace the change, than admitting that our own engagement may have fallen short in some way.

It is so much easier to ‘project’ than to acknowledge that we should have done something differently, been more proactive, and taken more responsibility etc. in order to ensure success.  Almost all situations involve a sharing of responsibility, which requires us to courageously consider our own role in every outcome.

Stepping up to the ownership of each of our roles in any given situation can be tough and uncomfortable, possibly even a little shocking.  Yet, it is only when we do, and we engage internally and externally in a more honest way, that the relationship with our self, as well as with others, deepens and matures

Next time you are tempted to lay blame, accuse and or criticise another for an outcome that is not in keeping with your hopes and ideals, take time to reflect on the possibility that you may have played a contributory role in the issue, and consider why you are feeling uncomfortable due to the challenges presented.

Check out whether you are being honest and true, or whether you have slipped into an age old technique designed to prevent feeling the pain, by projecting it on to somebody else.

Converse to our defensive actions, honest engagement within ourselves is immensely powerful and ultimately liberating, if only we pause for contemplation before pushing our feelings on to others.

Not only is our sense of personal power maximised in the perceptivity of projection, but also the power of who we are in the world.  There are few greater achievements than that of making the choice to live and work with authenticity and heartfelt honesty.