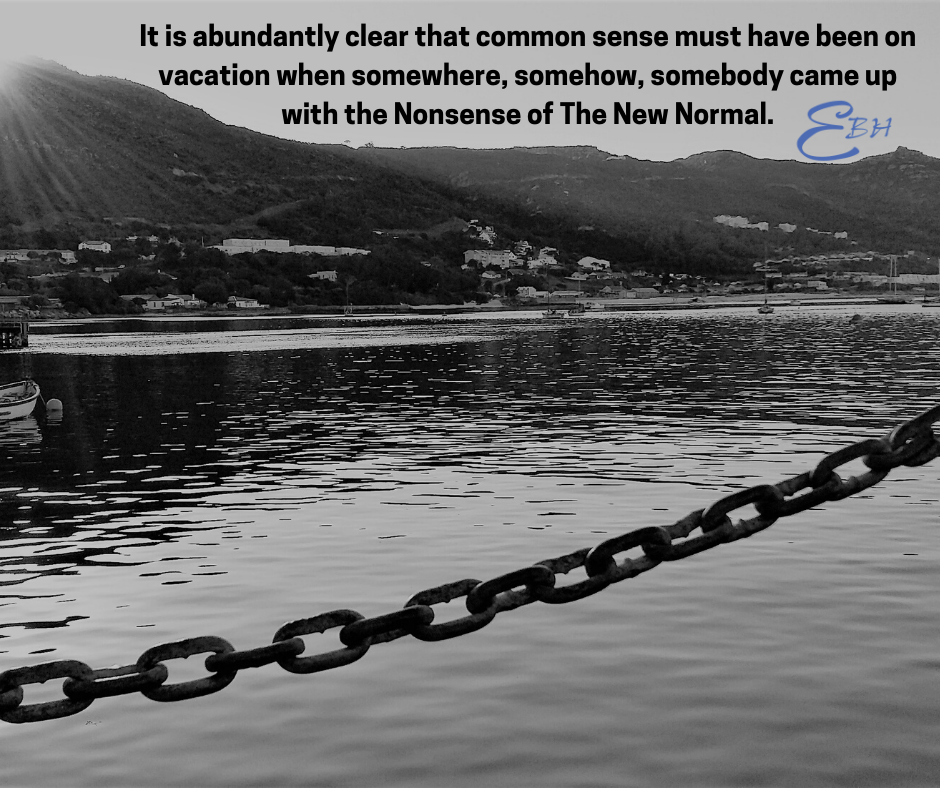 Much has shifted amongst the chaos of the current global pandemic and humanity has had to dig deep in finding ways in which to make it through.

Whilst many have suffered tremendous losses and continue to battle with enormous challenges, others have stepped up to the opportunities presented and are thriving in the discovery of their ability to adapt.

As with any unwelcome and uncomfortable shift however, conspiracy theories; fake news; fear-mongering; ‘telling’ on one’s neighbour and other less than positive eventualities have occurred, leading to questioning where common sense has taken cover during this time.

For example: the everyday reference to ‘The New Normal’, which sits in top place on my list of the most annoying COVID-19 references to have emerged so far, seems to have slipped into becoming an accepted part of conversation without the sense of it being questioned.

Furthermore, alongside this bizarre reference, is the often emphatic statement that the way in which we live life will ‘never be normal’ again.  An apparent foregone conclusion so easily reached in the absence of knowing what variable may change our lives tomorrow, let alone in the longer term future.

The cold truth is that there is virtually nothing new about a great deal of how we have had to adjust to operating via the benefits of cyberspace; it has been around for a long time and many (including me) have operated in this manner for years.  Those who had not migrated to the use of the various methodologies available before now, simply chose not to.

Although the reasons for such choices may vary, the bottom line is that much has been available for some time and has gone unused. All that has changed is that what was previously a choice, has become a necessity.

There is also not a great deal new about working from home.  This option has been a workable one for decades.

One ought not to confuse the facts, for very little of these working methods are new – and the only new factor is the absence of space or time for further lethargy and resistance to change.

As for normal, almost nothing about how we are living currently is particularly normal.  And it never will be.  The fact that abnormal behaviours such as social distancing may be required for some time yet, does not make them normal.  And no amount of reference to attempting to normalise the way in which we have been forced to stay apart will ever make it so.

I am fairly confident that, once the pandemic is under control, we will revert back to being human; doing the things we love and enjoy in very much the same way that we have done for eons.  For it is in these very actions and behaviours that we find our human-ness, our sense of self and our sense of community.

This is not a prophecy; it is merely a historical truth.

It is abundantly clear that common sense must have been on vacation when somewhere, somehow, somebody came up with the Nonsense of The New Normal.

There is no such thing.

There is only doing the best we can with what we have and adapting accordingly for as long as it is required.